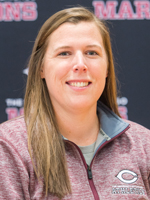 UChicago women's lacrosse launched a new era with the hiring of Kate Robinson as the program's first head coach in May 2017.

UChicago's newest varsity program is set to begin competition with Robinson at the helm in spring 2019. Women's lacrosse will become the school's 20th intercollegiate sport.

Randy Vite joins the Maroons in 2018-19 after two seasons as a graduate assistant coach at nearby Aurora University.

There, she helped the Spartans compile a 15-7 mark in the Midwest Women’s Lacrosse Conference in two years.

Prior to Aurora, Vite spent one season at Colorado State University-Pueblo as an assistant coach for the NCAA Division II ThunderWolves. During her two years in Colorado, she also served as an assistant coach at Pueblo West High School for a season while she worked for Teach for America, working as a Special Education teacher at nearby Risely Middle School International Academy of Innovation.

More recently, Vite also served as a varsity assistant for St. Charles High School (Ill.) for two seasons and coached high school girls club lacrosse for Players 360. She also had a stint as as the River City Youth Club Director.

As a player, Vite was a four-year letter winner and one-year team captain on the women's lacrosse team at Kutztown University in Pennsylvania. During her four years at Kutztown, Vite garnered numerous accolades, including a Pennsylvania State Athletic Conference All-Conference Second Team nod as well as a Scholar Athlete award.

Vite concluded her career with the Golden Bears as the program's all-time leader in ground balls (200) and games played (68). Vite ranks second in Kutztown's career record book in both caused turnovers (77) and games started (62) and sixth in career draw controls (55).

Vite graduated from Kutztown with a bachelor's degree in education. She majored in both special education and elementary education with a concentration in math and science. 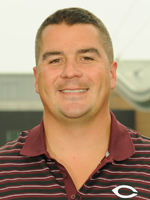 John Pont enters his first season as a volunteer assistant coach for UChicago women's lacrosse in 2019. He also currently serves as Offensive Coordinator and Quarterbacks Coach on the Maroon football staff since 2017.

The 2018 Maroon football team set a new school mark for points scored (365) in a season. The team's 63 points versus Beloit College also set a modern-era record. The squad ranked seventh in the nation in red zone offense. Quarterback Jeffrey Jackson broke the school record for completion percentage as well (64.5 percent).

Pont arrived on the Hyde Park campus from fellow University Athletic Association (UAA) school Case Western Reserve University. While at Case Western Reserve, Pont was the Receivers Coach in 2015 and added the title of Offensive Passing Game Coordinator in 2016. The Spartans averaged 240 passing yards per game in 2016, with wide receiver Brendan Lynch posting the second-most receiving yards in school history (1,049). As an offense, Case Western Reserve scored 39.2 points per game – the 26th-highest mark in NCAA Division III. Quarterback Rob Cuda was picked as the UAA Offensive Player of the Year.

Pont earned a bachelor's degree from Miami (Ohio) in physical education and went on to receive his master's degree in sport administration from Florida State. His grandfather, John Pont, was named National Coach of the Year in 1967 after leading Indiana University to their lone Rose Bowl bid.